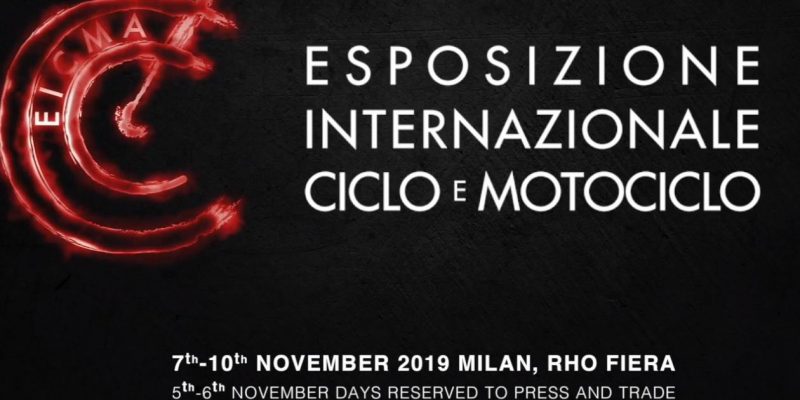 EICMA (Esposizione Internazionale Ciclo e Motociclo) is the world’s leading event for motorcycles and two wheelers, held annually in Milan, Italy. It is the world’s most important motorcycle show and this year is the 77th year the event is being held.

Vendors use EICMA to showcase new bike models, products, accessories and innovation. This year 1278 exhibitors from 44 countries will showcase products at the exhibition, which stretches over an area of 280,000 square meters

In the weeks leading to the exhibition vendors started releasing teasers of new models. In the two days before EICMA Yamaha and Honda released full details of their 2020 models, which you can read about in my previous posts.

Day 1 of the show brings us some exciting news from BMW, Suzuki, Kawasaki, KTM, Aprilia and Moto Guzzi, among others.

BMW unveiled the new S1000XR with significant upgrades to the previous model. The new 2020 model is lighter, stronger, faster and more versatile.

The chassis has been modified and BMW calls it Flex Frame chassis. It has been changed to improve ergonomics, performance and behaviour.

Although the design rests on the familiar contours of the S1000XR, it is completely new, modern and more attractive.

As expected, BMW unveiled today in Milan the F900R and F900XR – a Roadster-Naked and an Adventure-Road, both share the same platform.

The F900R is a new roadster that basically replaces the F800R, but takes the concept in a completely different direction: from a “simple and basic” to a well-designed, technological and dynamic roadster-Naked. The design of the F900R was heavily inspired by the great BMW roadster – the R1250R, and many similarities can be seen between the two.

The F900XR is the S1000XR’s little brother (a new version of it was introduced this morning as well), and is a Sports-Adventure, on a smaller scale. Here too, the design is akin to its big brother.

The pair gets a new engine – an upgrade of the F850GS engine – a parallel twin that grows in volume to 895cc. There’s a new exhaust system, and clutch slides as standard, and there’s an advanced grip control MSR – for the first time in the F family. The engine and motorcycle management system comes with electric throttles and 2 riding modes as standard and additional modes will be available as options.

The main chassis is based on the F850GS (steel bridge), with a front and rear double-sided fork and a single absorber in front. There’s an option to get the pair with the BMW ESA electronic suspension system.

In terms of electronics, the model pair gets a very respectable package: There is a 6.5″ colour TFT screen that we know of other BMW models, and it features a smartphone connection. Other features (some optional) include Adaptive Cornering Light, Keyless Ride and Intelligent Emergency Call. BMW promises a wide range of optional extras.

Suzuki unveiled in Milan this morning a pair of big V-Strom’s – the V-Strom 1050 and the V-Strom 1050 XT. The pair get a brand new design in the legendary DR BIG spirit, a larger 1,037cc engine producing 107bhp, as well as electronics and accessories upgrades.

The V-Strom’s familiar 1000cc engine has grown to 1037cc in the new model and meets the strict Euro 5 regulations. Around the engine is a completely new design, in the spirit of the 1980s Suzuki DR BIG – with the front of the V-Strom becoming significantly similar to that of the Big, as does the front mask, headlight unit, side panels and fuel tank.

Kawasaki unveiled the new Z900 in Milan this morning. Kawasaki’s popular Naked receives an aggressive design facelift, electronics add-ons such as peripheral LEDs and a colourful TFT screen, and the engine and exhaust system are tailored to the Euro 5.

The 4-cylinder, 900cc engine gets a new exhaust system with a more efficient catalytic converter, thus complying with stricter Euro 5 regulations. Engine management is also new, and the Z900 gets 3 riding modes and grip control for the first time, as part of the KTRC system.

More in the modern electronics segment – the Z900 is equipped with peripheral LEDs and a 4.7″ colour TFT screen – as the latest fashion imperative – with screen connectivity to  a smartphone over Bluetooth.

A month after revealing the new Ninja 650, Kawasaki unveils its Naked brother: the Z650, which received a facelift. The parallel-twin engine gets a new exhaust and revised airbox so it can meet Euro 5 regulations.

The dash has been replaced with a new 4.3” colour TFT screen, which can be connected to a smartphone and display messages and GPS navigation instructions. In addition, the Z gets all round LED lights.

The mechanical platform remains the same, with the exception of the Dunlop SportMax RoadSport 2 tires with which the motorcycle now come equipped with.

The 790 Duke grows to 890 and gets upgraded mechanical systems and electronics. The new KTM 890 Duke R is stronger, sportier, and designed for strong, demanding riding.

The LC8c engine of the 790 Duke increased its capacity from 799cc to 869cc and now produces 121hp. KTM equipped the 890 Duke R with a fully adjustable APEX WP suspension system and a Brembo Brake System. The chassis also differs between the models.

The design is similar to the 790 Duke, but the colour scheme is newer and more “combative”. The chassis is also painted orange – like the entire KTM R Series. The seat height climbs from 825mm to 834mm, and the overall weight drops from 169kg to 166kg.

In terms of electronics and controls, the 890 Duke R gets all of the 790 Duke’s, namely grip control, ABS tilt, LED headlights, TFT screen, two-way quickshifter option, as well as 3 engine and motorcycle management modes.

KTM unveiled the 390 Adventure, a new “baby adventure” bike based on the 390 Duke. This model has been spotted in spy photos over the last couple of years and it is now officially announced. It shares the same platform as the 390 Duke and has the same 373cc engine producing 44bhp. It comes with a slipper clutch as standard, has 6 gears and an optional quickshifter.

The 390 Adventure has the classic adventure size wheels: 170mm front and 177mm rear. KTM put a great deal of emphasis on ergonomics and comfort, trying to reach the widest possible audience. The seat height is 855mm, the fuel tank is 14.5 litres, and above the front mask there is a small windscreen. The dry weight is 158kg, and the ground clearance is 200mm.

The 390 Adventure comes with LED headlights, as well as a colour TFT screen that connects to a smartphone – same as all modern KTM models.

Aprilia unveiled one of the most important bikes in the Milan EICMA show, and certainly the most important bike for the company – the RS660. It is a medium capacity sports motorcycle designed for road use. Aprilia is planning to release 2 models on this platform so it is possible the RS660 and its future siblings will bring the company back to proper sales and recognition in the motorcycle world.

The design of the RS660 is inspired by the RSV4 and includes its double fairing. The engine is a 660cc forward facing parallel twin, which is in fact the front half of the RSV4’s 1100cc engine. It will produce about 100bhp. The dry weight of the RS660 is only 169kg.

Aprilia is planning 2 more models built on this new and important platform: the first is the Tuono 660, a concept which was revealed today. The second is the Tuareg 660, which was “displayed” as a teaser behind bushes, and may bring Aprilia back into the adventure bikes scene.

The RS660 is expected to be released during 2020. No pricing available yet but with such assemblies and electronics it is unlikely to be cheap or affordable. Still, this is an important platform for Aprilia and a welcome step by the Italian company.

Moto Guzzi’s V85 TT Adventure bike gets a Travel version which was announced today. It will have the same 853cc V-twin engine producing 80bhp and the same tubular frame. But the Travel version gets a taller touring windscreen, hard luggage, central stand, fog lights, heated grips and Moto Guzzi MIA, a multimedia platform that connects to a smartphone. In addition, the new model gets a bronze colour scheme with red & black graphics. It will be fitted with Michelin Anakee adventure tires