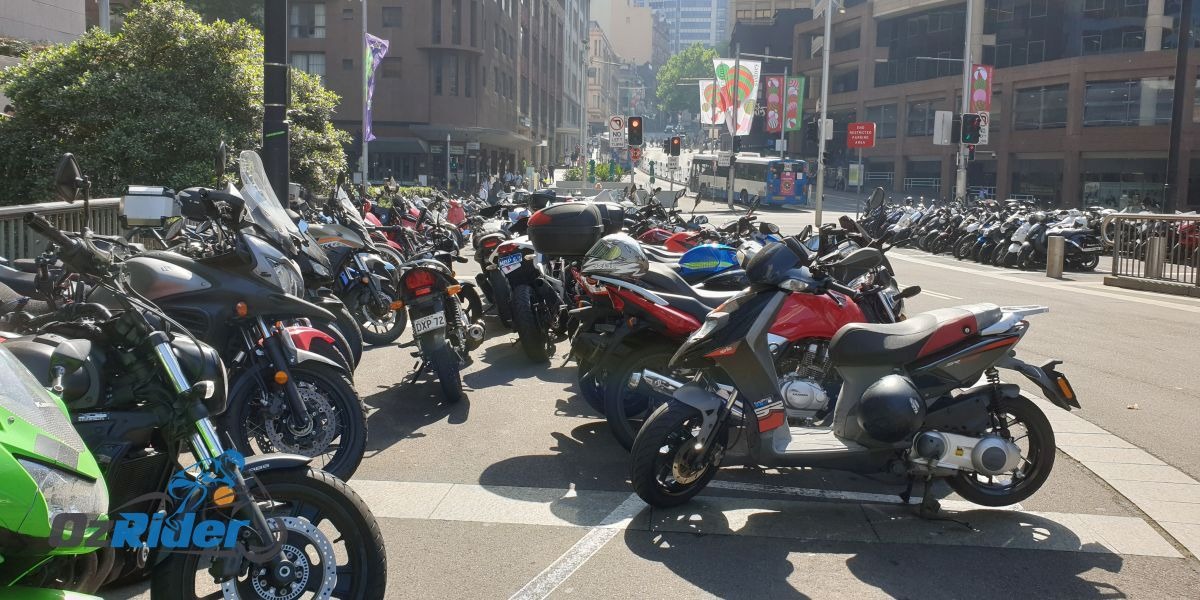 There’s a chronic shortage of motorcycle parking in Sydney’s CBD. Insufficient numbers of designated motorcycle parking, as well as overcrowded designated spots, are a real problem for riders. The problem is not unique to the CBD. Similar problems exist in other major centres in the Sydney metro, such as North Sydney (particularly bad!), and Parramatta. However, the issue in the CBD is by far the worst and affects a large number of riders.

Parking on the Footpath

Unlike the City of Melbourne, where motorcycles can legally park on the footpath, in Sydney it is illegal to do so. Some building managers allow motorcycles to park on private property adjacent to the footpath, however, it is up to the discretion of the building owner/manager.

Designated motorcycle parking blocks do exist in the Sydney CBD. For example on the corner of Druitt St and Sussex St, on the northern end of Kent St and in Curtin Place. However, the permanent congestion in all these designated spots is proof they simply do not provide an adequate solution for the parking problem.

Another option is to park in the time-limited, metered street parking. The City of Sydney permits motorcycles and scooters to park for free at any of the parking meters in their local area. This includes most of the CBD but excludes the Royal Botanic Garden and some areas around The Rocks, Darling Harbour and Pyrmont. However, most of these are 1-2 hours parking, which is simply not long enough for anyone working in the city. In addition, in most cases a machine-issued ticket cannot be securely displayed on a motorcycle or scooter.

The commercial parking stations in the CBD charge motorcycles the same fees as cars. In most carparks in the CBD these fees are exuberant.

Motorcycles Are Not the Problem, They Are Part of the Solution

It is a well-known fact that motorcycles are part of the solution for Sydney’s horrible traffic congestion. Motorcycles reduce traffic pressure and congestion, they occupy a quarter or less of the space occupied by a car and can handle traffic density better. They take far less space to park and can use spaces not suitable for cars. They cause far less road wear, are more fuel efficient and have a much smaller environmental impact. The more motorcycles we have on our roads the less drivers will be sitting in their cars and the less parking spots they will require.

No Strategy to Accommodate Motorcycles

Despite this, it appears that local councils in Sydney, including the City of Sydney, do not have an adequate strategy to accommodate motorcycles. Policy makers at the councils seem to ignore the fact that motorcycles are part of the solution to the congestion problem.

The City of Sydney provides plenty of examples for this. In 2018 the City of Sydney infrastructure spokesman said “…the City is advocating walking, cycling and public transport to encourage a shift away from private vehicle transport…”. Yet in a bizarre sequence of events in June 2019, the City proposed the replacement of an existing block of motorcycle parking in Wilson Street Newtown with a car share space!

This ridiculous proposal generated a strong community protest, resulting in the City of Sydney backing down and cancelling the proposal. Should such a proposal have come up in another country I would have thought to myself that someone at the council is getting “incentives” from the car-share company. Luckily in Australia such things do not happen.

Riders Have Not Been Notified

Another ridiculous situation was created recently when the authority named Place Management (formerly The Sydney Harbour Foreshore Authority) took control of parking management in the areas under their responsibility around The Rocks, Darling Harbour and Pyrmont. Place Management started issuing infringement notices to motorcycles who parked without paying for tickets in areas where motorcycles were previously exempt from parking fees. The change of management was not very publicised, parking signs were not updated, and riders had no way of knowing that they were now supposed to pay for parking. Place Management have since updated their policy, which is now the same as the City of Sydney, i.e. free motorcycle parking in metered areas.

In addition, the City should allow riders to park their motorcycles responsibly on the footpath in selected areas, where they cause no obstruction. It works in Melbourne, it can work in Sydney!

Parking Should Be Part of a Bigger Plan

However, this should not be done in isolation. It should be done as part of a bigger plan to encourage commuting drivers to abandon their cars and replace them with motorcycles and scooters.

Reduce taxes on motorcycles and safety gear, reduce tolls for motorcycles, increase the availability of advanced training, reduce rego costs and increase the number of parking places. All these measures combined will assist with encouraging people to swap their vehicles with motorcycles. The whole of Sydney will benefit from the ease in congestion and the cleaner air. More riders, more motorcycles-aware drivers, more people experience the joy of riding, everybody wins!

The Ability to Take Responsibility

Look Out For Motorcycles

ATGATT: All The Gear All The Time

The Dangers of Tunnel Vision